Is there a one rayed Star?

A one rayed star would be a point.

A two rayed star would be a line.

A three rayed star would be a fractured piece

of broken crystal, diamond or quartz, sapphire or topaz.

A four rayed star would it be a square,

In front burns the pentagram,

behind the effulgent six rayed star,

look up in the night sky,

every one is seven and beyond.

Each star shines in Indra’s web

woven in dark and light,

an infinite tapestry of points

from nothing to something:

a picture of points,

a photo of dots.

Yes, there is a one rayed star,

and yes it has a point.

taken from Some Notes on 21st Century Sorcery.

Upon a time when you were caught in the Khyber Pass past sundown, the oddest things could happen to you.  It paid to have friends who had friends who would take you into their walled compounds before the other Pathans knew you were there. 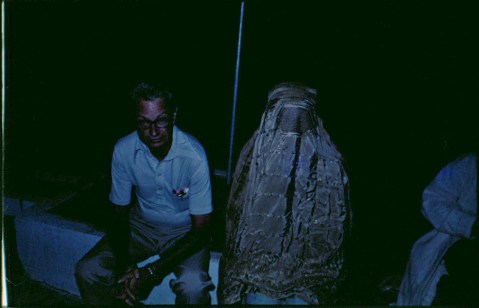 I may never know if that is my mother under that burka, or perhaps just the lady of the house.  But I will tell you one thing about any group of people who want an exit strategy from a foolish invasion of Afghanistan, unless they have a way of placing the destiny of that country back into the hands of the people who lived in compounds like this, it will never be stable again.  I believe we were all tied up with USAID at that time, before the Soviet invasion.

Busy times in the Palouse country.